A plea to sanity (and humanity)

Stop lockdowns, stop mandatory face masks and get back to normal

We're in a state of madness and completely lost the plot. It seems we can't admit that COVID-19 didn't turn out as deadly as Ebola or SARS and we overreacted, because then we're being accused of not taking it seriously or not caring. Shouldn't we care for ALL lives, not just victims of corona. The longer we continue like this, the more lives are in peril.

Yes, every victim of corona is a sad and every death caused by this illness is a tragedy, but it's also a reality we need to start to accept. If we want to prevent every possible death, then stop selling ropes so people cannot commit suicide and hang themselves, stop building roads to prevent all road accidents, stop selling junk food to prevent people dying from clogged arteries. It's totally unrealistic and where does it end?

We're now in the second wave of the corona virus and we see very different results from the first wave. We now know that shoving ventilators down patients' throats is not the right treatment and boosting people's immune system is correct approach! Vitamine C, Vitamine D and Zinc seem to be crucial, but just eat veggies and go outside to breath fresh air (without a face mask!) is just essential for staying healthy and sane.

The following chart shows the number of Covid-19 cases versus Deaths in Scotland between 28 February and 21 October this year. However keep in mind that the number of tests have significantly increased compared to the first wave and during the first wave only patients admitted to hospital were tested (and even not properly). 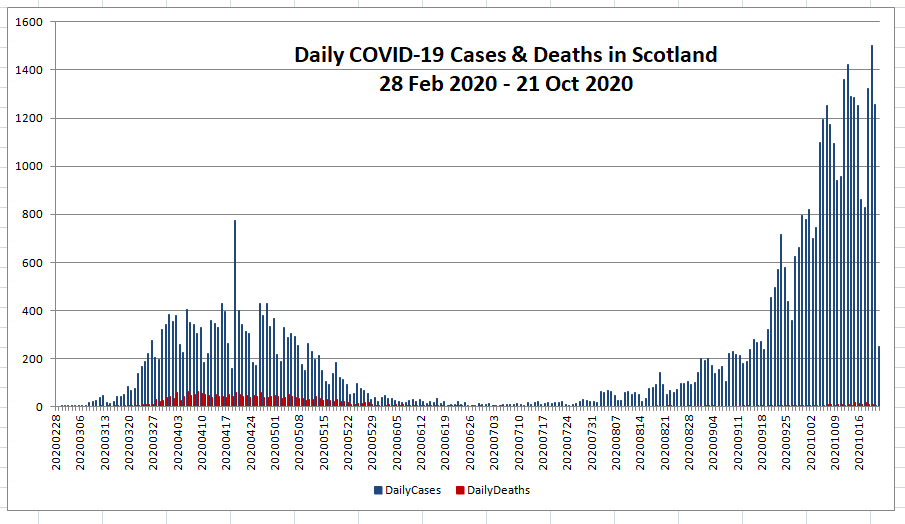 With total cases on the rise, but no significant increase in deaths, it's vital to review the liberties we have given up to fight this disease. How many lives are we actually saving and how many unnecessary deaths have been caused by the restrictions put in place by the government's unrealistic attempt to 'eradicate' this flu.

The restrictions so far already have severe negative consequences like:

With unemployment on the rise, who is going to pay for it all? If we continue at this rate even governments go bust and can only be 'saved' by companies who really don't have our best interest at heart. Healthcare will become something for the elite only and the NHS will not survive, because there is no one left with a job to pay for it.

This current crisis is pharmaceutical's industry wet dream and governments are doing their dirty work of keeping people fearful of each other and fearful of living.

"Stay inside, stay locked up, no hugging, cover you smile, be afraid.... be very afraid, especially of other people until our saviour 'the vaccine' is here!"

The only winners of this insanity are and will be: 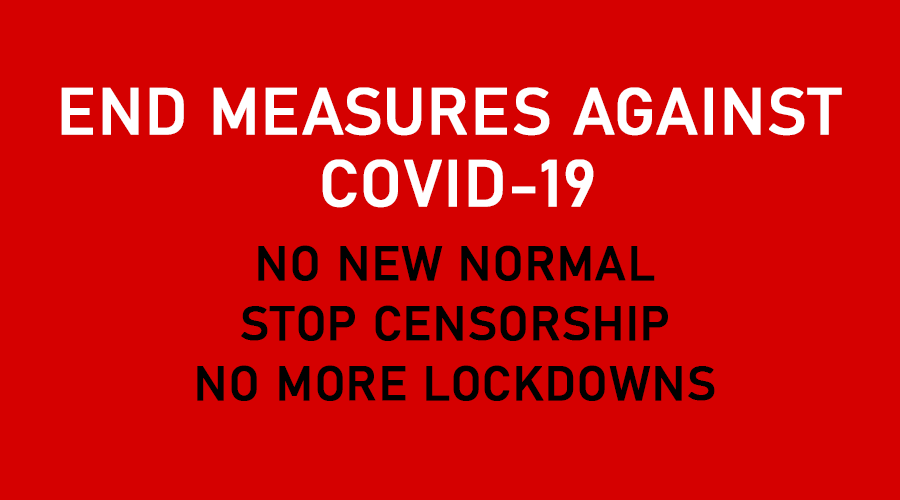 At the moment we're living in a society of self-inflicted destruction, with paranoia and unrealistic fear of death and other people. To me that is not living and I'm saving no one.
Let's start living again, wake up from this nightmare and become humans again. Let us care for those in need and return to a world where we can hug our loved ones and see each other's smiles towards a brighter future.